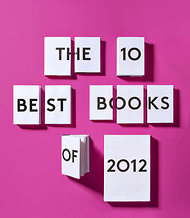 The year’s best books, selected by the editors of The New York Times Book Review.

Taking up where her previous novel, “Wolf Hall,” left off, Mantel makes the seemingly worn-out story of Henry VIII and Anne Boleyn newly fascinating and suspenseful. Seen from the perspective of Henry’s chief minister, Thomas Cromwell, the ruthless maneuverings of the court move swiftly to the inevitable executions. Both this novel and its predecessor were awarded the Man Booker Prize. Might the trilogy’s forthcoming conclusion, in which Cromwell will meet his demise, score Mantel a hat trick?

Ware’s innovative graphic novel deepens and enriches the form by breaking it apart. Packaged in a large box like a board game, the project contains 14 “easily misplaced elements” — pamphlets, books, foldout pages — that together follow the residents of a Chicago triplex (and one anthropomorphized bee) through their ordinary lives. In doing so, it tackles universal themes including art, sex, family and existential loneliness in a way that’s simultaneously playful and profound.

A HOLOGRAM FOR THE KING, By Dave Eggers.
McSweeney’s Books

In an empty city in Saudi Arabia, a ­middle-aged American businessman waits day after day to close the deal he hopes will redeem his forlorn life. Eggers, continuing the worldly outlook that informed his recent books “Zeitoun” and “What Is the What,” spins this spare story — a globalized “Death of a Salesman” — into a tightly controlled parable of America’s international standing and a riff on middle-class decline that approaches Beckett in its absurdist despair.

Smith’s piercing new novel, her first in seven years, traces the friendship of two women who grew up in a housing project in northwest London, their lives disrupted by fateful choices and the brutal efficiency of chance. The narrative edges forward in fragments, uncovering truths about identity and money and sex with incandescent language that, for all of its formal experimentation, is intimate and searingly direct.

A veteran of the Iraq war, Powers places that conflict at the center of his impressionistic first novel, about the connected but diverging fates of two young soldiers and the trouble one of them has readjusting to life at home. Reflecting the chaos of war, the fractured narrative jumps around in time and location, but Powers anchors it with crystalline prose and a driving mystery: How did the narrator’s friend die?

BEHIND THE BEAUTIFUL FOREVERS, Life, Death, and Hope in a Mumbai Undercity.
By Katherine Boo.
Random House

This National Book Award-winning study of life in Annawadi, a Mumbai slum, is marked by reporting so rigorous it recalls the muckrakers, and characters so rich they evoke Dickens. The slum dwellers have a skillful and empathetic chronicler in Boo, who depicts them in all their humanity and ruthless, resourceful glory.

FAR FROM THE TREE. Parents, Children, and the Search for Identity.
By Andrew Solomon.
Scribner

For more than a decade, Solomon studied the challenges, risks and rewards of raising children with “horizontal identities,” traits that they don’t share with their parents. As he investigates how families have grown stronger or fallen apart while raising prodigies, dwarfs, schizophrenics, transgendered children or those conceived in rape, he complicates everything we thought we knew about love, sacrifice and success.

THE PASSAGE OF POWER. The Years of Lyndon Johnson.
By Robert A. Caro.
Alfred A. Knopf

The fourth volume of Caro’s prodigious masterwork, which now exceeds 3,000 pages, explores, with the author’s signature combination of sweeping drama, psychological insight and painstaking research, Johnson’s humiliating years as vice president, when he was excluded from the inner circle of the Kennedy White House and stripped of power. We know what Johnson does not, that this purgatory is prelude to the event of a single horrific day, when an assassin’s bullet placed Johnson, and the nation he now had to lead, on a new course.

THE PATRIARCH. The Remarkable Life and Turbulent Times of Joseph P. Kennedy.
By David Nasaw.
The Penguin Press

Nasaw took six years to complete this sprawling, arresting account of a banker-cum-speculator-cum-moviemaker-cum-ambassador-cum-dynastic founder. Joe Kennedy was involved in virtually all the history of his time, and his biographer persuasively makes the case that he was the most fascinating member of his large, famous and very formidable family.

For several centuries now, thinkers have wondered, “Why is there something rather than nothing?” In search of an answer, Holt takes the reader on a witty and erudite journey from London to Paris to Austin, Tex., as he listens to a varied cast of philosophers, scientists and even novelists offer solutions that are sometimes closely reasoned, sometimes almost mystical, often very strange, always entertaining and thought-provoking.

These fragments I have shored against my ruins…